The Bellarine Peninsula. A bit isolated because you have to go through Geelong to get there from Melbourne, or take the Queenscliff to Sorrento ferry. So it has a country atmosphere, but comes complete with bustling and growing towns ... Leopold, Drysdale, Clifton Springs, Ocean Grove/ Barwon Heads, Queenscliff and Point Lonsdale ... 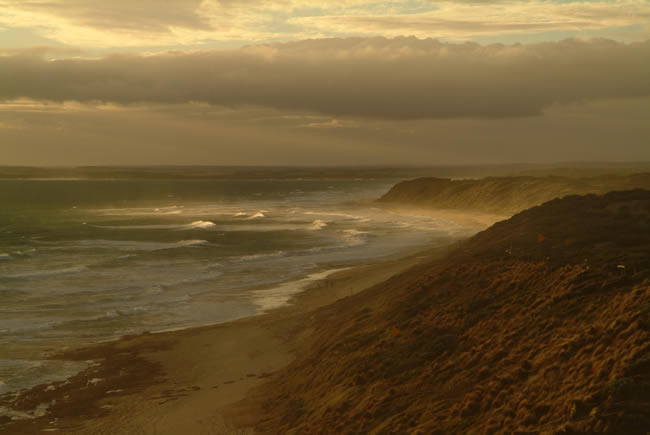 Beautiful picture of Thirteenth Beach, near Barwon Heads, Bellarine Peninsula, Victoria, Australia. Thirteenth Beach near Barwon Heads is a popular surf spot. It was very cloudy and not the sort of lighting to take a shot, but we set up, composed the shot and waited around for more than and hour. A gap opened up in the clouds and spotlighted the beach, it only lasted a few seconds. January 2003.

The patience of the photographer. Marion told me the other day that it was more like two and a half hours, and they were not then yet organised enough to have chairs. They subsequently bought some lightweight stools. But that's what it takes to get good shots - the right light. Just like Rembrandt before him, Joe knew the importance of getting the light right! 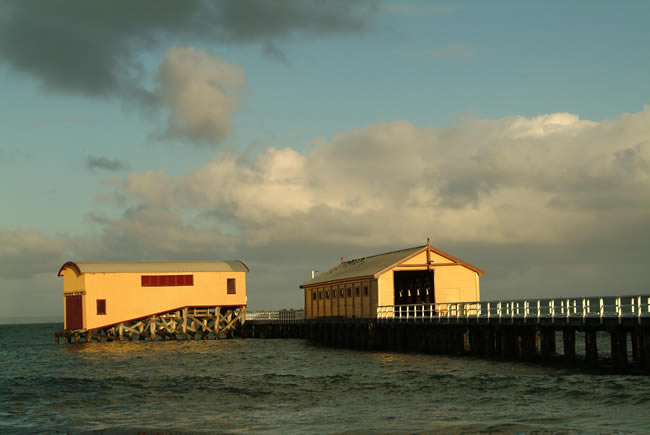 Queenscliff pier, Bellarine Peninsula, Victoria, Australia. Sunshine glows on the pier buildings just after a storm has passed. On the roof of the building on the right are a large group of birds sheltering from the wind and rain that has just passed through. June 2004. 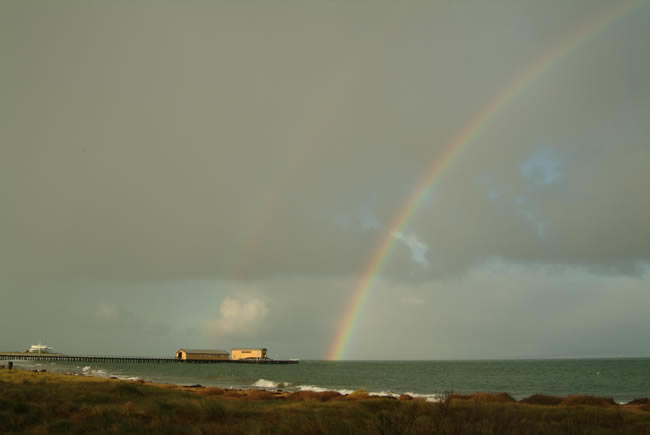 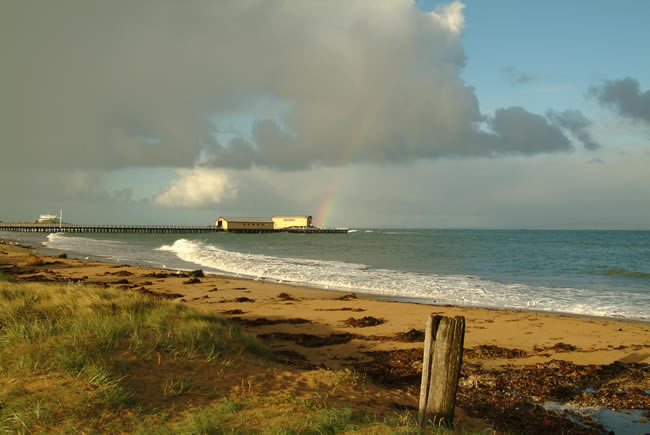 Queenscliff beach, Bellarine Peninsula, Victoria, Australia. The white 'building' in the background on the left of the picture is the Queenscliff to Sorrento ferry. June 2004.

Beaches are interesting places with all sorts of things to be seen, from driftwood to tiny animals to shells to colourful stones to someone's forgotten mobile phone... 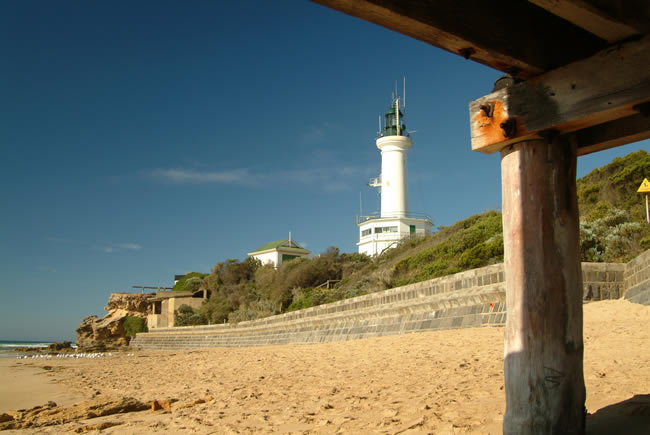 How times change. My phone now has an 20 megapixel camera, and Nokia released a Windows phone with a 41 megapixel camera a year or two ago! That's just a phone ... I wonder what the dedicated cameras are like? Technology just moves on ... 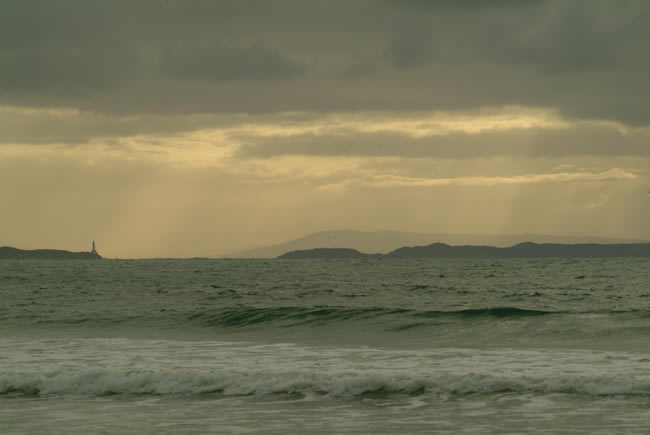 This shot was used in Richard Everist's book, Geelong and the Bellarine Peninsula, a BESTSHOTS publication. The book contains a large body of my (Joe's) photography. January 2003. 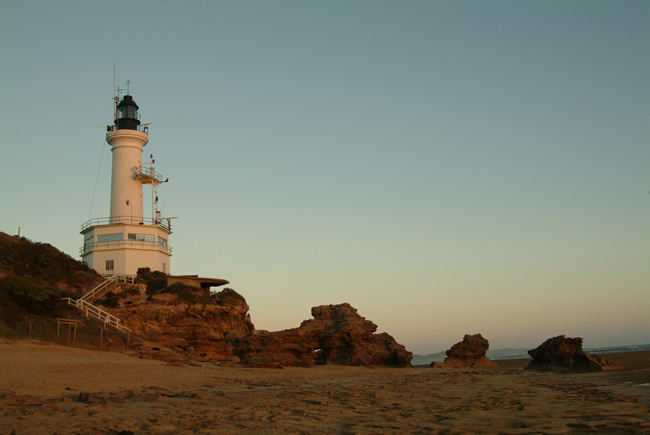 Dusk, Point Lonsdale lighthouse, Bellarine Peninsula, Victoria, Australia. The light house overlooks the notorious Rip. The rocks around the light house have been weathered in an unusual way making them jagged and sharp. We have not seen any other rocks along the south west coast that have eroded in a similar way. December 2002. 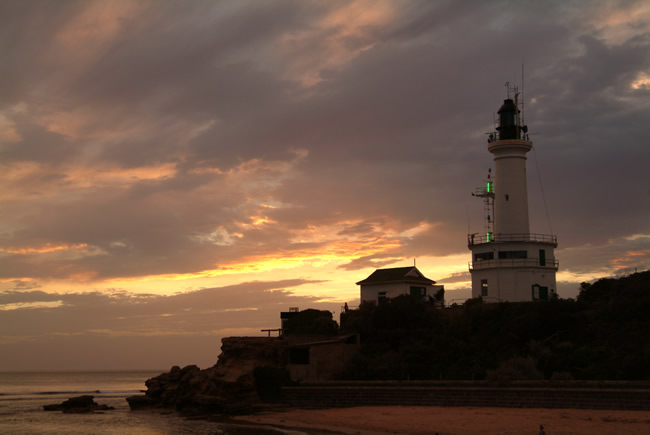 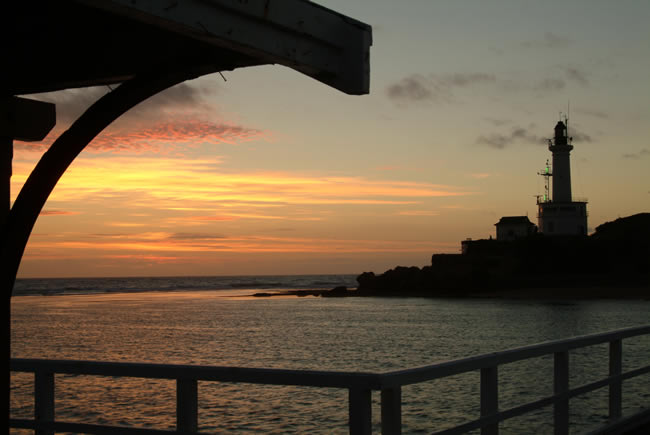 The glowing, Point Lonsdale, Bellarine Peninsula, Victoria, Australia. The glowing is a Scottish term to describe this late light. January 2003. 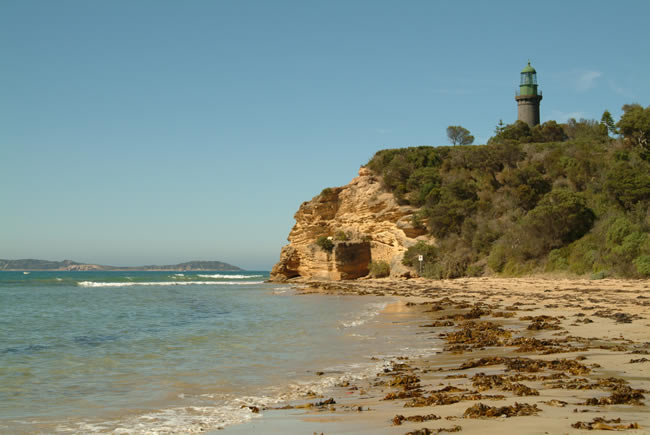 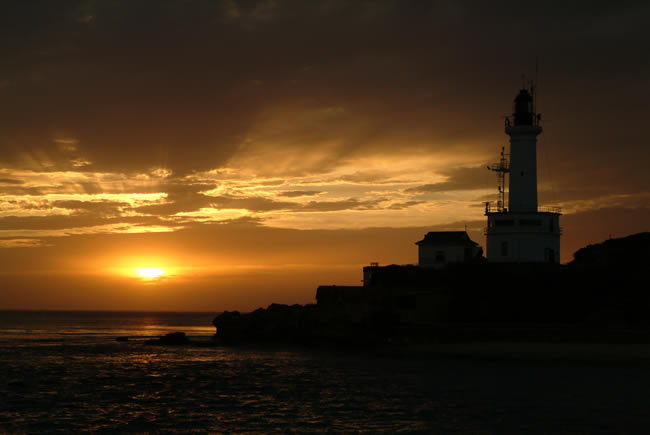 William Buckley was a convict who escaped from the ship Calcutta in Port Philip Bay in 1803. He was befriended by aboriginals of the Wauthourong tribe, given a wife by whom he had a daughter, and lived for thirty two years in a hut that he had built near the mouth of Bream Creek.

Buckley surrendered himself to a party under the command of John Wedge after he overheard the Aborigines plotting to kill the people on a visiting ship and to rob it. He was pardoned by the governor and given a job as an interpreter. He eventually moved to Hobart, married, and died there in 1856.

He must have been a pretty smart operator to have survived in a totally foreign situation, learned the language and customs of the Wauthourong people, and re-adapted to European society after thirty two years. 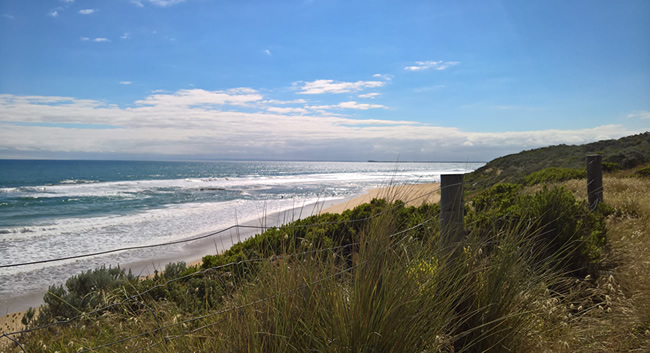 Looking west from the cliff near the Point Lonsdale Lighthouse, Victoria, Australia. Follow the track past the flag signalling pole and the old fortifications, to the end of the track. At the top of the cliff, next to the stairway down to the beach, somebody has thoughtfully provided a park bench with a magnificent view from the rip to Ocean Grove/ Barwon Heads. Ocean Grove can be seen in the far distance and the shimmering sea attracts the surfers and swimmers. December 2016 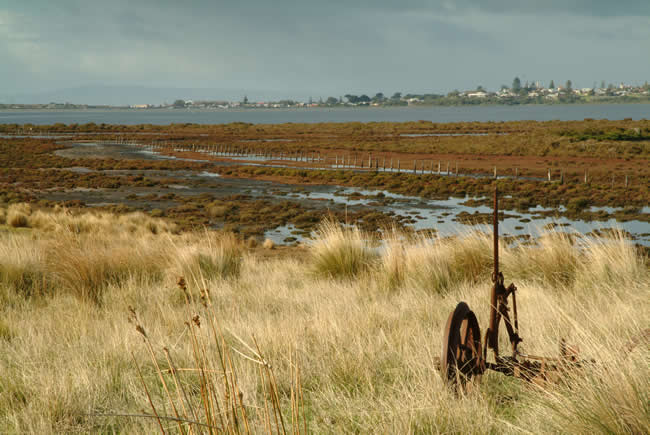 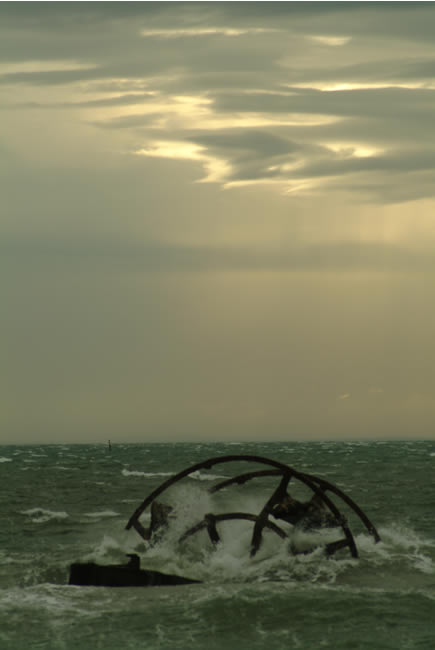 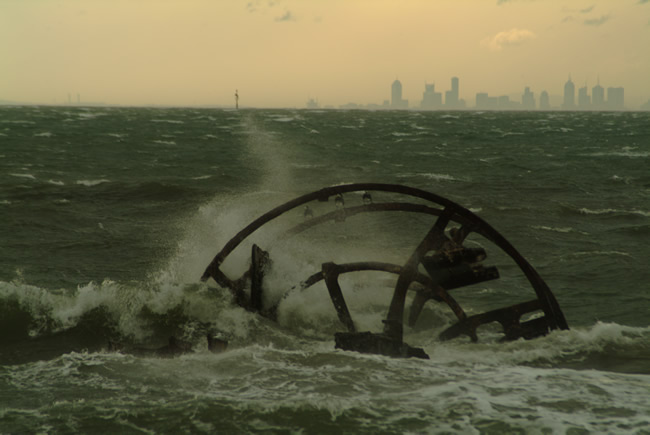 The paddle steamer Ozone was wrecked here to form a breakwater. You can see 3 birds on the wreck, braced with legs apart and their backs to the wind.

Taken with a 450mm lens, while sitting in my 4wd on the edge of the beach. I had the lens barrel resting on the partly lowered window, facing into the wind. The vehicle rocked back and forth in heavy winds and I was only able to get off one or two exposures and then had to clean the salt spray off the lens. This exercise was repeated many times before I had a sharp image with a horizontal horizon, and the right wave crashing into the wreck remains.

This image is featured on page 134 of Richard Everist’s book, Geelong and Bellarine Peninsula. June 2004. 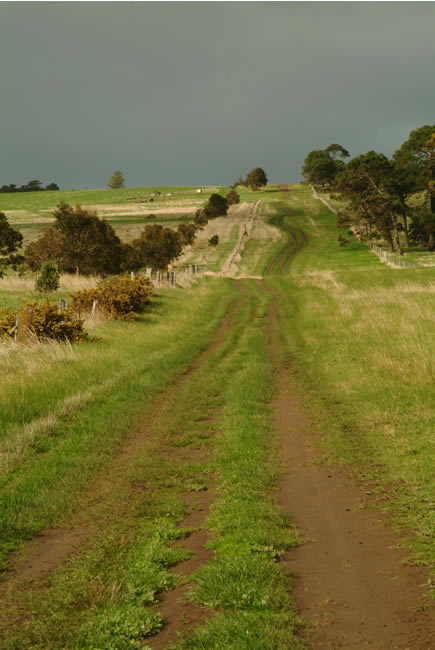 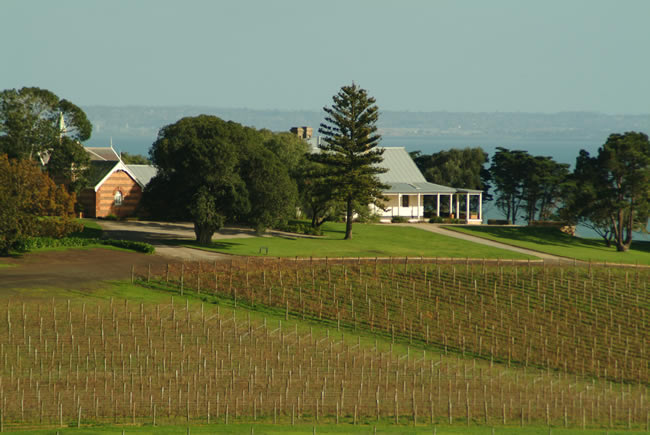 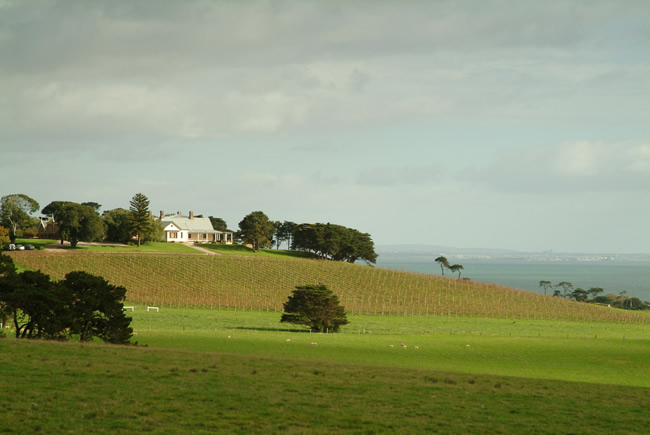 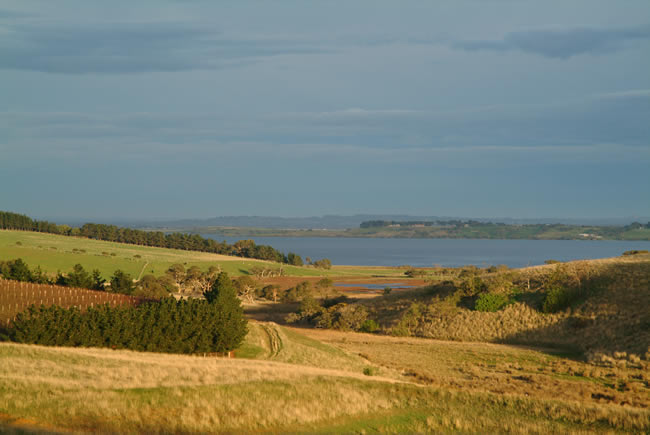 Sunrise, Lake Connewarre, Bellarine Peninsula, Victoria, Australia. Warm morning light skips across the undulating landscape, with the sky and background still to be lit by the warmth of the morning sun. June 2004. 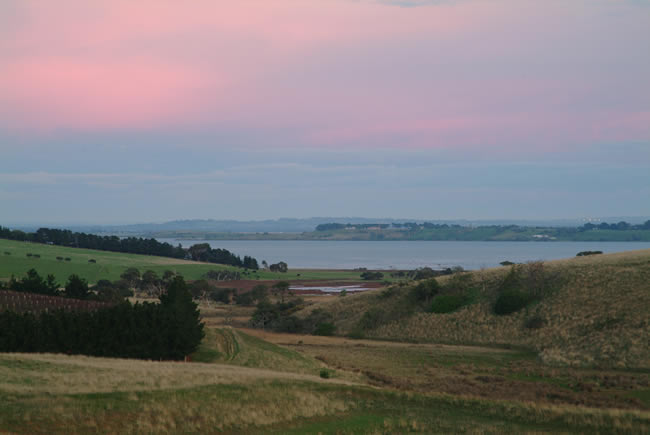 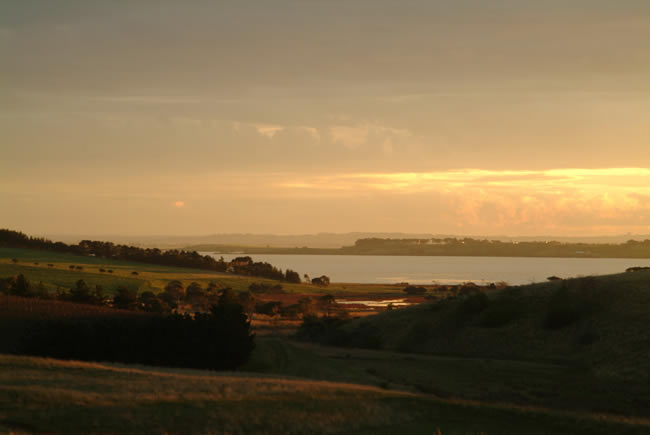 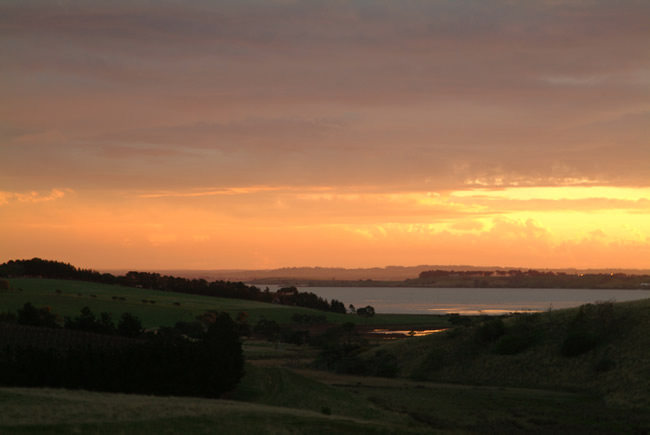 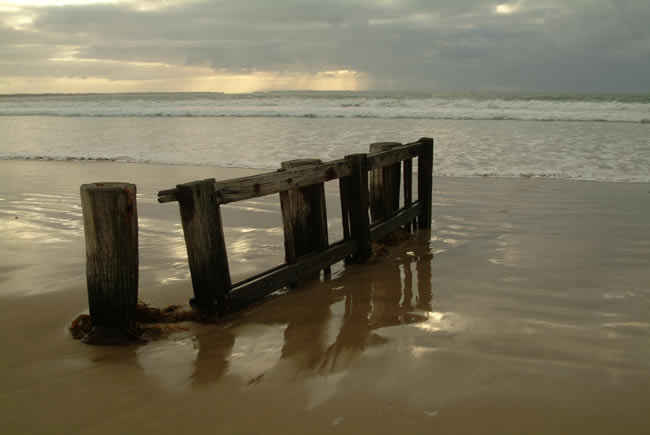 Pearl morning sunrise, RAAFS beach, Bellarine Peninsula, Victoria, Australia. RAAFS Beach between Barwon Heads and Ocean Grove. The beach got it’s name due to the fact that RAAF personnel took time out to relax here during the war years. March 2003. 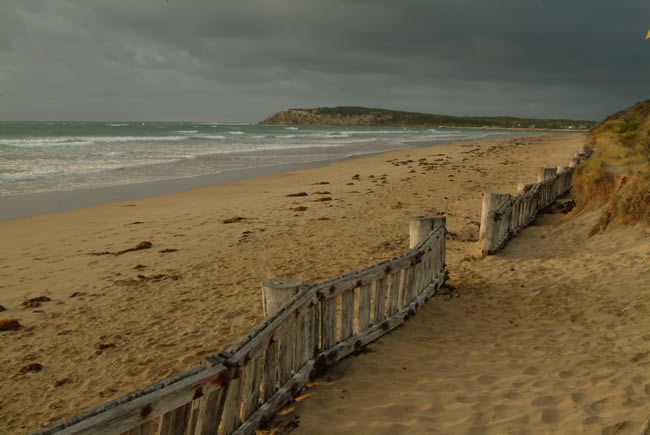 Early morning, RAAFS beach, Bellarine Peninsula, Victoria, Australia. Looking toward the Bluff at Barwon Heads. The weathered and textured fence was built to control erosion. I loved the rustic character and construction. Using it to lead the viewer’s eye through the picture, we waited for the rising sun to break through the clouds. January 2003. 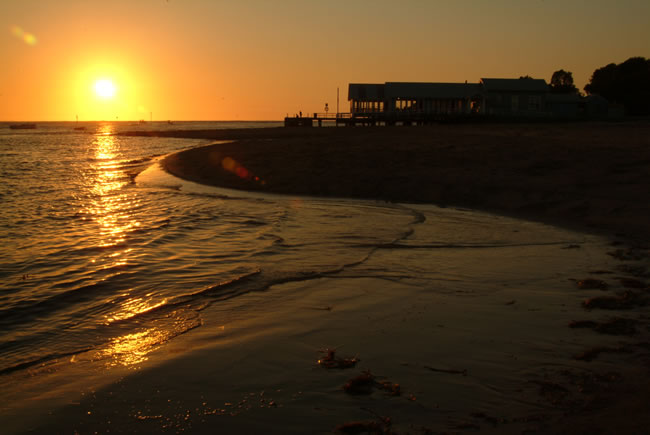 Barwon River mouth, between Barwon Heads and Ocean Grove, Bellarine Peninsula, Victoria, Australia. Film location for TV series Sea Change. Diver Dan's shack is still there. You can see it if you look carefully to the right of the restaurant that has been built on the pier since. January 2003. 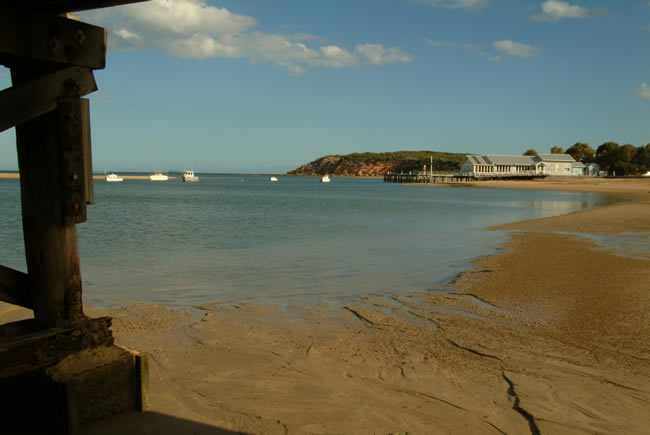 Bluff, Barwon Heads, Bellarine Peninsula, Victoria, Australia. Shot from under the old Barwon River Bridge. It is the longest timber road bridge in Victoria. Built in 1927 it replaced the ferry service that was used by holiday makers. The impressive timber pylon construction is a feature identified by a heritage report. February 2003.

You can clearly see Diver Dan's shack, from the TV series Sea Change still there, to the right of the restaurant that has been built on the pier. The bridge has since been replaced - see below. 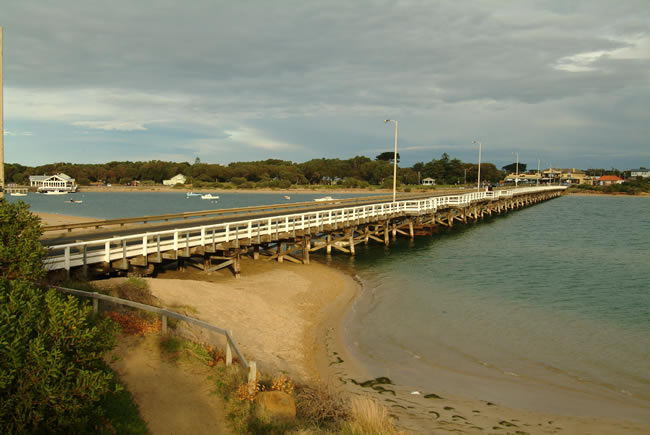 This is an historic photograph. The bridge you see in the photo no longer exists. It has been replaced by two bridges - a road bridge which utilises some of the pylon technology from the old bridge, and a footbridge a few metres downstream. So this pic has real historic significance.

A Vicroads project information sheet can be found here.