True courage. Determination. Persistence. Visionary. Brilliant. Compassionate. A family man. Yet in the end could not cope with the bitter criticisms of smaller men

A refugee from the Irish potato famine, he was born in Castletown, County Meath, in Ireland in January 1843. He trained as a surveyor with the local railway company, and was very good at what he did. Charles Yelverton O'Connor left Ireland forever at the age of twenty one and set off for New Zealand, where he quickly found employment with the government - first in a surveying team on the North Island, and then as Assistant Engineer in the province of Canterbury on the South Island.

His work was on the wild and rugged west coast of New Zealand's South Island, where he built water supply solutions for the mines. He loved the work, and would work long hours in some pretty tough conditions. When he built a road over the Southern Alps, not only was he working in some very steep and rugged territory, but the rainfall was phenomenal – 120 inches or about 3 metres per year! But the road got built! He was at this stage in his mid twenties.

Harbours feature in his work. He had to prevent some harbours on the west coast of New Zealand from silting up. He achieved this by building massive breakwaters to protect them from the seas coming in from the west. The ports of Westport and Greymouth were developed by him.

By 1883 he had been appointed New Zealand's under-secretary for public works. But this was desk job, and it bored and frustrated him. So when the Premier of Western Australia, John Forrest, wrote to him and asked him to become Chief Engineer for the colony, he was ready. After some argy bargy about the salary, CY O'Connor left New Zealand in 1891, with his family. The New Zealand government did not even pay him all of the retirement allowance that he was due after twenty five years of service!

John Forrest, like all good leaders, knew that when he needed someone to do a job he needed to get the best, and that he had to be prepared to pay him well. He paid – the West Australian Government, actually – O'Connor 1200 pounds per year. The best the Kiwis could offer him was 750 pounds per year! But Forrest had found his man and his man made a profound difference to the future of Western Australia.

O'Connor's influence on Western Australia lies in three main area - railways, harbours, and water. He showed his power for independent thinking, and the courage to follow up on his beliefs, in all three.

Providing a safe, all weather harbour for the capital of Perth was his first job. He proposed an inner harbour in the mouth of the Swan River. There was a great reef in the entrance that was a problem. The prevailing 'expert opinion' also reckoned that sand movement in the area would cause such a harbour to silt up quickly. But he did his homework and found that such sand movements were not the problem that they had been made out to be, and that the reef could be blasted out. He proposed two breakwaters to protect the harbour from the seas.

If John Forrest needed O'Connor, so O'Connor needed Forrest. He presented the WA Government with detailed and costed plans for the new Fremantle harbour. It needed a man of the stature of Forrest to get it through Parliament and to get the funding organised. It took five years to get the job done - a pretty amazing accomplishment, given the very limited machinery available in those days! Construction started in 1892 and was finished in 1897.

That same Fremantle Harbour is still in use today, 121 years later, though it has had an extension or two since then. The critics were wrong, the harbour hasn't silted up, and Fremantle is the major port in Western Australia. He was awarded the Companion of the Order of St Michael and St George for this job. This award showed the value of his work, as it was recognised internationally. It didn't stop the critics, though, as we shall see!

Eventually the value of his work was recognised and a statue by Pietro Porcelli was erected near the Fremantle harbour in 1912. 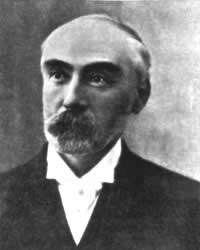 Charles Yelverton O'Connor, the brilliant engineer who designed and built the Fremantle Harbour and the Goldfields Pipeline, and who vastly developed and successfully managed the West Australian railway system

Eventually the value of O'Connor's work was recognised and a statue by Pietro Porcelli was erected near the Fremantle harbour in 1912.

One of his jobs was to run the local railways. When he started there were about 190 miles of government owned railway tracks and it was losing money at the scary rate of about 40 000 pounds a year! He set out on a program of extending and refining the rail network, getting more powerful locomotives and more rolling stock.

He also presented the government with a costed plan for moving the railway workshops from their obviously inadequate site in Fremantle out to Midland. But this took 12 years to happen, and didn't really get going till after his death in 1902. Once again the critics had held up a necessary development!

The job that he is mostly remembered for is the goldfields water pipeline. Gold had been discovered in the Yilgarn region near Southern Cross. Then more even further east near Coolgardie. Then Paddy Hannan made his famous find at Mt Charlotte in what is now Kalgoorlie. And the gold rush started, as wannabe miners streamed to the area from around the world. In no time there were thousands of miners in the area.

But even miners with a thirst for gold have an even greater thirst for water. Without water life stops. And the area around Kalgoorlie there is no water. It is a dry, hot country! Miners were literally dying because of a lack of water. Water was being sold in Kalgoorlie for the equivalent of $30 a litre – more expensive than whisky! And it wasn't particularly clean, either. Sometimes it was infected with typhus, and many died from it. At Kanowna, 12 miles from Kalgoorlie, most of the cemetery was filled with typhoid victims.

Something had to be done, and John Forrest again turned to O'Connor, and O'Connor did not let him down. After extensive research carried out by himself and his staff, including consultation with some of the great engineers of the world when he went London for his investiture, he presented detailed and costed plans for a dam to be built on the Helena River east of Perth, and the water to be pumped 350 miles or 600 kilometres to Kalgoorlie. In the process the water would have to be pumped 1000 feet or about 300 metres uphill.

When it was finished it was the greatest water engineering project in the world. One hundred and five years after the water first flowed from that pipe at the Mt Charlotte reservoir in Kalgoorlie, the pipeline is still the lifeblood of Kalgoorlie and the goldfields, and of many towns near the pipeline on the way from Perth.

He needed all of John Forrest's backing to get it up, and even then it took two years before funding was arranged and work started. To his great credit Forrest backed O'Connor all the way. This was not true of the rest of the WA parliament and the majority of the press in Perth. Men hiding behind parliamentary privilege attacked him mercilessly; parts of the press were even more savage. AG Evans, in his book C.Y. O'Connor: his life and legacy records this passage from the Sunday Times of 9 February 1902:

...And apart from any distinct charge of corruption this man has exhibited such gross blundering or something worse, in his management of great public works it is no exaggeration to say that he has robbed the taxpayer of this state of many millions of money...This crocodile imposter has been backed up in all his reckless extravagant juggling with public funds, in all his nefarious machinations behind the scenes by the kindred-souled editor of the West Australian.

Critics claimed he was lining his own pockets at the expense of taxpayers. They said he was a charlatan who did not know what he was doing - and this after the success of Fremantle harbour! Small men, faceless men, continually attacking a giant, a man of vision and courage.

The Goldfields Pipeline, which provides 23 000 cubic metres of water to the West Australian goldfields every day, was designed and largely built by the great engineer CY O'Connor. It was completed within a year of his death in 1902.

The West Australian government should have backed him. They should have come to his defense. But they did not. John Forrest was gone - gone into federal politics at the time of the birth of the nation. The rest of the government had never really supported the pipeline. The silence from the government was deafening. Instead of taking the critics to task over baseless and libellous claims like the one above they did nothing.

O'Connor could take no more. He left a note:

He then rode his horse on to the beach near Robb's Jetty south of Fremantle and took his own life. So ended the life of a giant among men, hounded to death by small men who could do nothing but criticise. A memorial has been constructed in the ocean, just beyond the breakers, near the place that he took his life.

You have to wonder what motivated his critics. It cannot have been any problems with his work. He had successfully built Fremantle Harbour. He had sorted out the railway system, including the construction of the Swan View railway tunnel, turning it from a massive loss maker into profitability. The Mundaring Weir on the Helena river had been constructed successfully, in spite of some pretty significant technical problems.

O'Connor himself believed that it was orchestrated by men representing an English company who had wanted the contract to build the pipeline.

O'Connor loved his family and he loved people. He married Susan Letitia Ness in 1873 and together they had seven children. He suffered the great sorrow of losing one of his children in a domestic accident while in New Zealand. He and his family were known to be generous hosts. His home was a happy place to be.

He loved horses and rode them for pleasure and also as a means of transport when inspecting his projects. And he was good at it - he was well known for his horse riding skills.

He was a compassionate man who looked after his workers. He had a good example in this. His father had treated the share-farmers on his property in Ireland with compassion during the potato famine, even though this cost him his farm. O'Connor was known for being fair with the people who worked for him - though he was strict and meticulous and expected the same from his workers. So the compassion and the fairness moved from one generation to the next.

O'Connor had given himself to his family and to many others around him he cared for his workers - he was born from compassionate, caring people, and that was with him all his life. Through his courage and brilliance, used in service to others, he brought a better life to countless thousands. He deserves recognition as one of the great men of Australian history.