The Kimberleys. A lot of Australian narrative lies in the Kimberleys. This is where the Duracks drove their cattle to from Queensland in the 1880s - an amazing feat described so well in Mary Durack's book Kings in Grass Castles. The Bungle Bungles, the Ord River, Kununurra and Wyndham ... the northernmost part of the dynamic state of Western Australia, perhaps to be a scene of much expansion and population growth. But the great beauty must be cared for ... 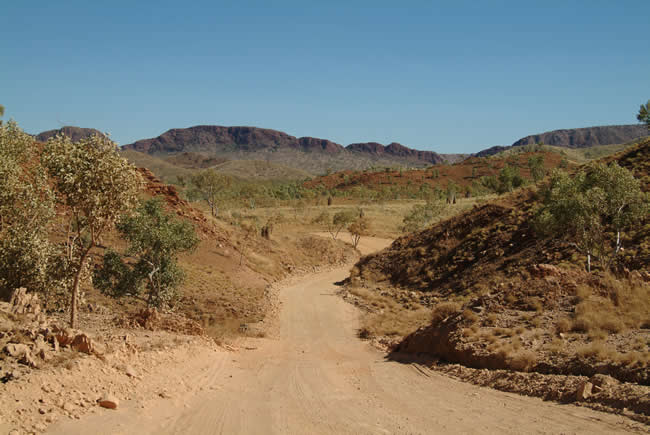 Mabel Downs Station track, Northern Territory, Australia. This track carries you through Mabel Downs Station to the Bungle Bungles. A very scenic drive of around 50 km that takes a good one and a half hours. The track is very rough and only suitable for 4wd vehicles. July 2005.

What is it about gravel tracks in rugged places that is so evocative? Not too much of it though! I remember after some 300 plus miles of mud, slush, gravel and corrugations on the Eyre Highway crossing the Nullarbor in 1974 I nearly got out and kissed the bitumen just outside Penong in South Australia. At that time the road from the West Australian border to Penong was still unsealed, though the roadworks for re-routing and sealing it had begun. 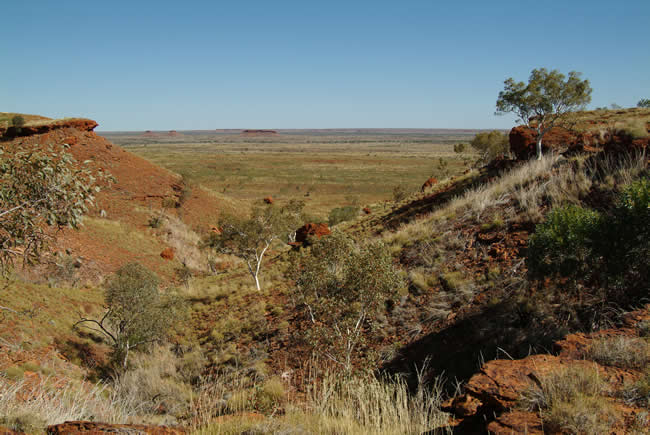 Balgo Hills, Kimberleys, Western Australia. Looking toward 'The Pound'. The population of Wirrumanu Aboriginal Community (Balgo Hills) has fluctuated over the years. Family, cultural and social expectations create a very mobile community. In 2005, the average population was between 350-400. July 2005. 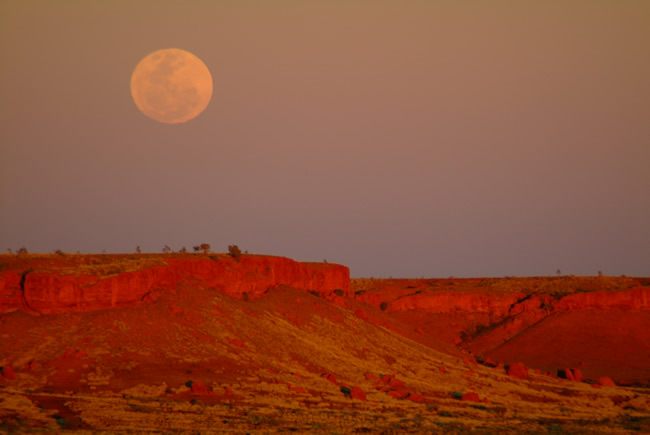 Moon rise over Balgo Hills, Western Australia. Balgo Hills is an Aboriginal community of around 400 people, 36 km off the Tanami Rd. Beyond the township is the “Pound” where on a full moon evening you can see the moon rise on one side of you and a spectacular sunset at 180 degrees on the other side. July 2005. 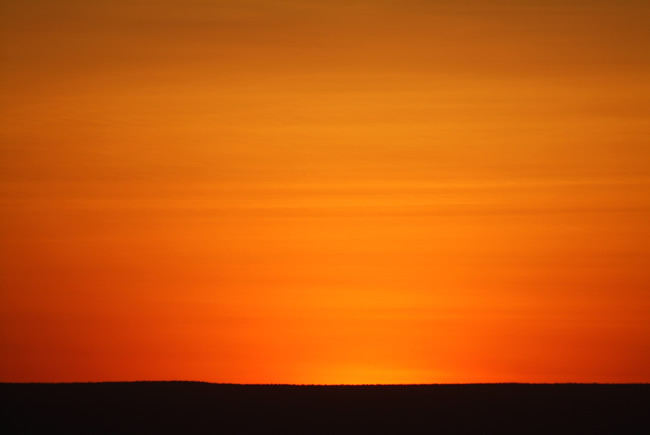 Sunset over Balgo Hills, Western Australia. We had our backs to this sunset while we photographed a full moon rising above the Balgo Hills cliffs in the area known as ‘The Pound”. See previous pic. We then turned 180 degrees and captured this vivid colour display. July 2005. 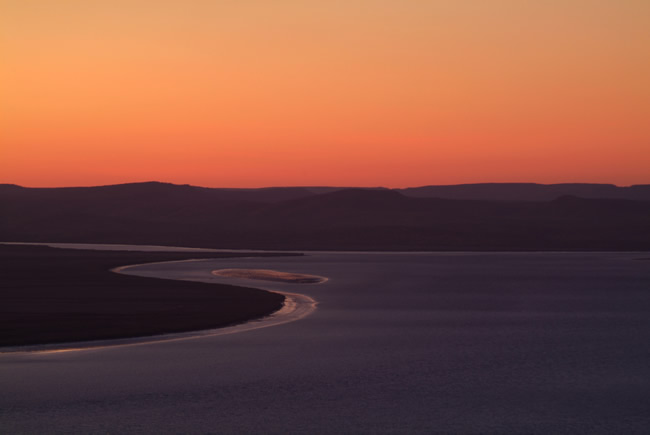 Wyndham sunset, Bastion Lookout, Western Australia. Looking out over where the 5 rivers flow into the Cambridge Gulf on the top edge of Australia. This is one of the best panoramic views at sunset and sunrise to be experienced in Australia. August 2005. 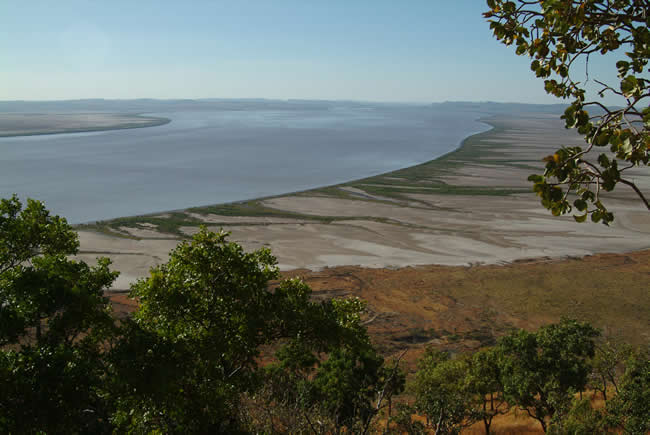 Wyndham five rivers view, Kimberleys, Western Australia. THE LAST FRONTIER - This small and relatively undiscovered town typifies the character and spirit of the Kimberley, and is situated on the southern tidal waters of the Cambridge Gulf where the confluence of the King, Pentecost, Durack, Forrest and Ord Rivers meet. This is one of the most dramatic views along the Australian coastline. July 2005. 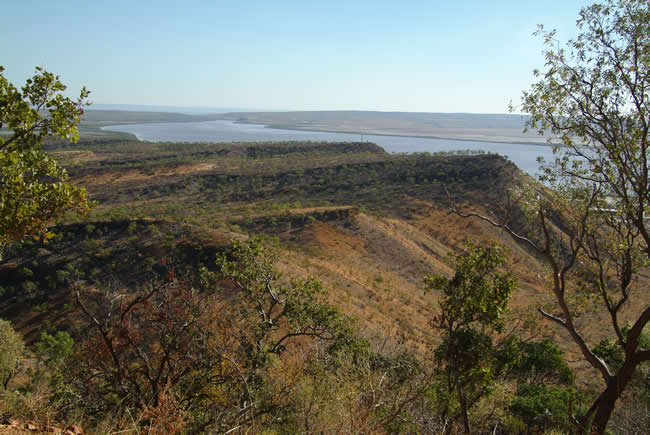 West arm, Wyndham, Kimberleys, Western Australia. The original town of Wyndham Port is located on Cambridge Gulf. The township of Wyndham East is on the highway some 30 kilometres from the port, and is the main commercial and residential area.

Wyndham is the most northerly town and harbour in Western Australia and the entrance is dominated by an 18 metre sculpture of a big crocodile standing 3 metres high. The town is known as the home of the 'big croc', a reflection of the large numbers of saltwater crocodiles in the Cambridge Gulf and West Arm Estuary. July 2005. 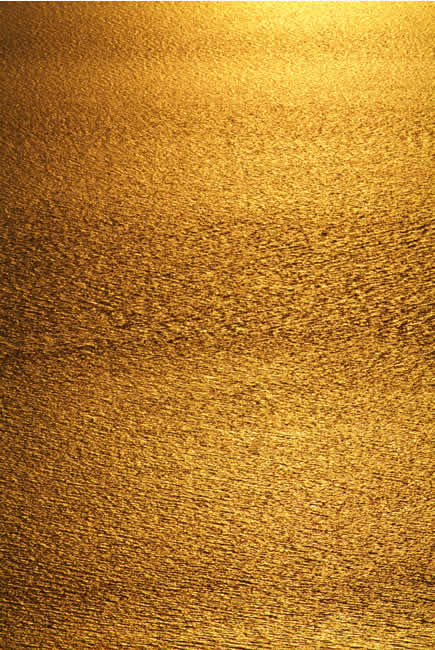 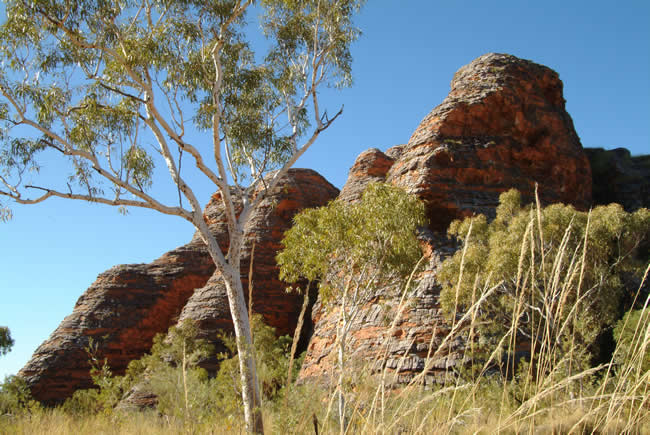 The Bungle Bungles are one of the wonders of outback Australia. Formed many years ago the sandstone massif has the appearance of gigantic bell shaped rock towers with horizontal banding produced by layers of black lichens and orange silica. The sandstone is so fine that it crumbles when touched. July 2005.

Purnululu National Park was established in 1987. It skyrocketed to world fame in no time at all. In 2003 Purnululu NP was inscribed as a World Heritage Area, thanks to its outstanding geological value and its incredible natural beauty.

Purnululu National Park, or Bungle Bungle, Kimberley, Western Australia. It is claimed that in the early years of white settlement of the Kimberley, when the brutal massacres of local Aborigines were at their height, that many Aborigines retreated to the safety of the Bungle Bungle climbing up to the plateau with notched tree trunks which they pulled up after themselves to prevent pursuit. July 2005.

Purnululu National Park, or Bungle Bungle domes, Kimberley, Western Australia. A highlight for many visitors to the Kimberley region is a visit to the strange dome-like rock formations known as the Bungle Bungles.

This area was once a limestone massif, but has been eroded and sculpted into a multitude of red sandstone domes. Orange and black lichen rings around the domes add extra colour and are most unusual.

The Bungle Bungles are 56 kilometres off the main highway and access requires a 4WD vehicle. July 2005. 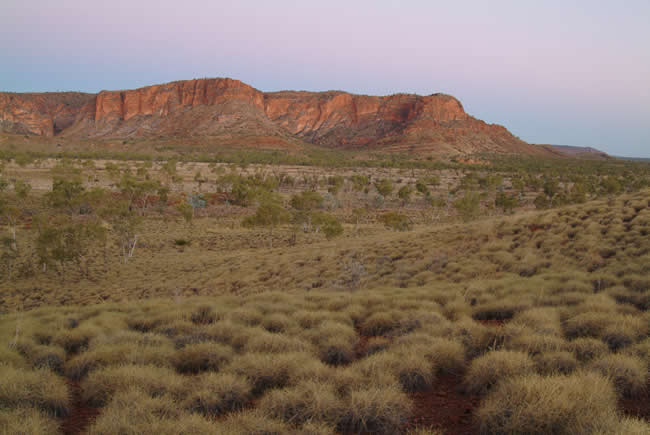 Purnululu National Park, or Bungle Bungle, at twilight, Kimberley, Western Australia. Twilight on section of the Bungle Bungle Range. The opposite south east side features “bee hive” striped domes. Amazingly only a few people knew it existed until a few years ago. July 2005. 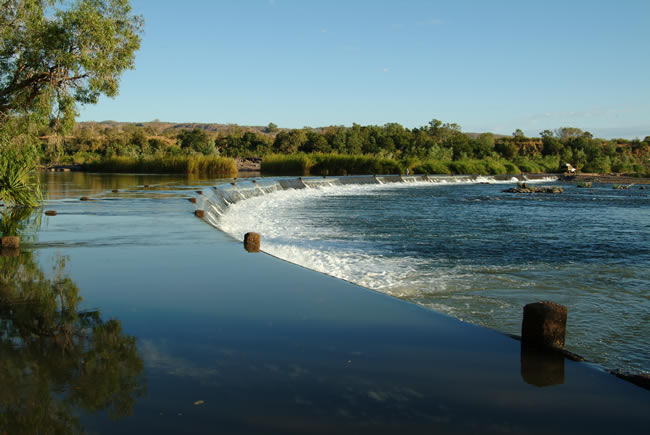 If there are crocodile warnings everywhere, then the lady wading in the water on the far side of the crossing is taking quite a risk! 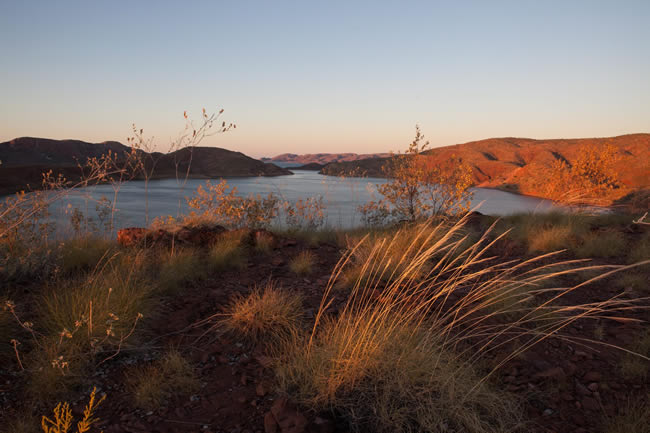 Lake Argyle, Kimberleys, Western Australia. Formed by the damming of the Ord River, it is an enormous body of fresh water - 20 times the size of Sydney Harbour! Agriculture is developing rapidly there and the potential for supplying water for other parts of Australia is great. July 2015.

The Ord river Dam was completed in 1971. The dam itself is an earth fill dam, 335 metres long and 98 metres high. It filled in 1973 and the spillway flooded until 1984. Lake Argyle's usual storage is about six million megalitres, the largest water reservoir in Australia. Lake Gordon/ Lake Pedder in Tasmania is larger, but that is two dams connected by a canal.

In 1996 the dam was raised by 6 metres, which doubled the capacity of Lake Argyle. Though there was some concern about it silting up, the amount of sediment inflow has reduced in recent years.

Lake Argyle was originally intended to grow cotton, but insect pests caused too many problems and that was abandoned in 1974.

Currently there are about 150 square kilometres of farmland irrigated, growing a large variety of crops.

But what about using all that water to supply the drier parts of western Australia further south? WA Premier Colin Barnett proposed a canal when he was opposition leader in 2005. The idea was bucketed by many, and may well have cost him the election. But there is an ongoing interest in piping water from the Kimberley to Perth. Former MP Ernie Bridge has said that a pipeline from the west Fitzroy River intersecting the Perth to Kalgoorlie pipeline would be good. Colin Barnett still believes that the abundant water in the north of Western Australia is a resource that should be better used, and that it is inevitable that it will happen eventually.

To me it is just obvious. The whole state would benefit. The north would see real development - which is vastly overdue. The challenges are significant, but then they were even more significant 110 years ago when they built the Perth to Kalgoorlie pipeline with very basic technology. That pipeline has been operating successfully ever since. 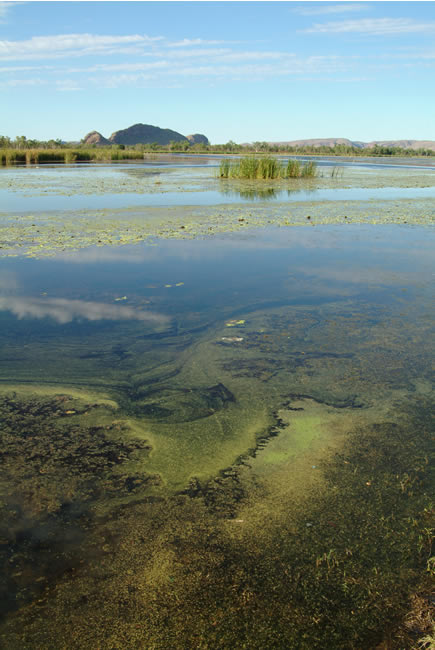 Sleeping Buddha, near Kununurra, Kimberley, Western Australia. The sleeping Buddha can be seen on the horizon in the distance. Kununurra is an oasis of water and lush green growth due the availability of water from the damming of the Ord River. July 2005.

According to the Mirima Language Centre the name 'Kununurra' is based on the Miriwoong word "Goonoonoorrang", which simply means large river. 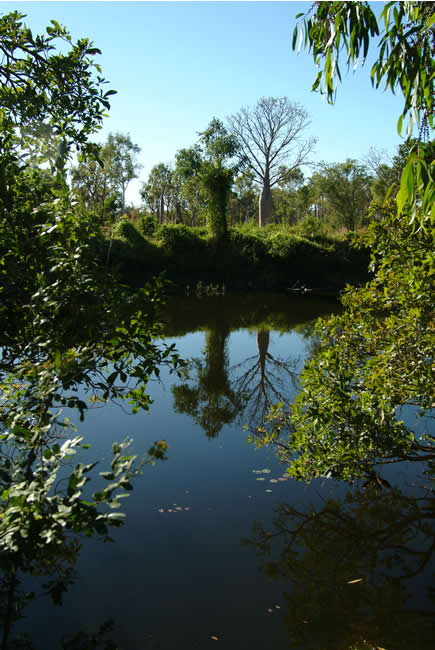 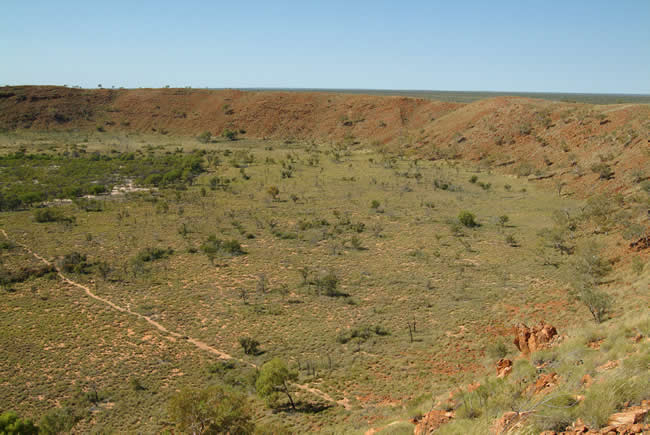 Wolfe Creek Crater, Kimberley, Western Australia. Although it has long been known to Aboriginal people, who called it Kandimalal, the Wolfe Creek meteorite crater was only discovered by Europeans in 1947, during an aerial survey. Located off the Tanami Rd it is one of the highlights along a track of over 1000km in length. July 2005.

The Wolfe Creek crater was formed by a giant meteorite that crashed into the earth with a speed of 15 km a second, leaving the second biggest crater on the planet. 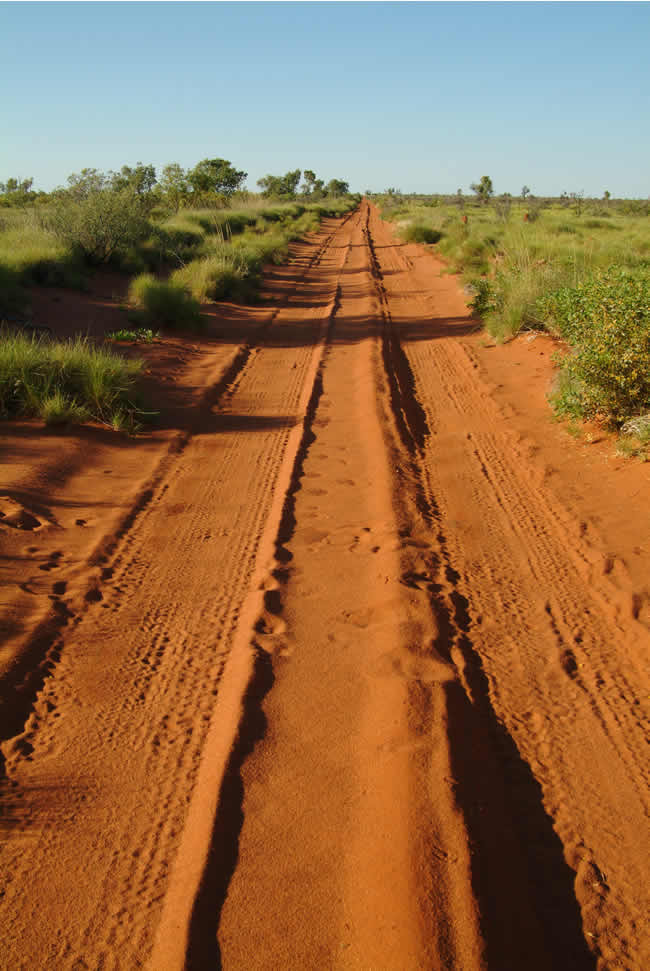 Track to Lake Gregory, Kimberley, Western Australia. The Paruku (Lake Gregory) Indigenous protected area is a wetland of national and international importance covering some 270,000 ha in the northern Great Sandy Desert. It is managed by the Kimberley Land Council. July 2005.