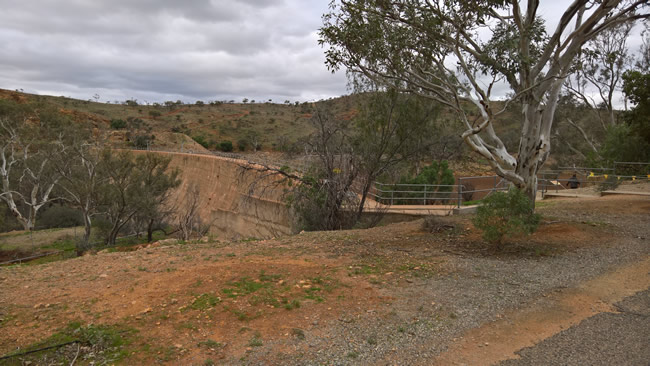 Umberumberka Reservoir, Silverton, New South Wales Australia. The Umberumberka Reservoir was completed in 1915, more than 100 years ago, after being commenced in 1911. Before that broken Hill was supplied by the Stephens Creek Reservoir, but this was only a small reservoir which was rapidly becoming inadequate. It was a pretty labour intensive project with about 500 men employed on construction. About 50 000 200 kg drums of concrete were brought to Silverton by train and the last several kilometres by horse and cart. The landscape is quite rugged, and in the early 1900s must have posed some pretty big challenges for the construction crew. But just as CY O'Connor and his crew built the Perth to Kalgoorlie pipeline in 1897-1902, so George Mullen and his crew overcame the obstacles and succeeded.

There is a memorial to George Sidney Mullen, the supervising construction engineer, at the road end of the wall. June 2016.